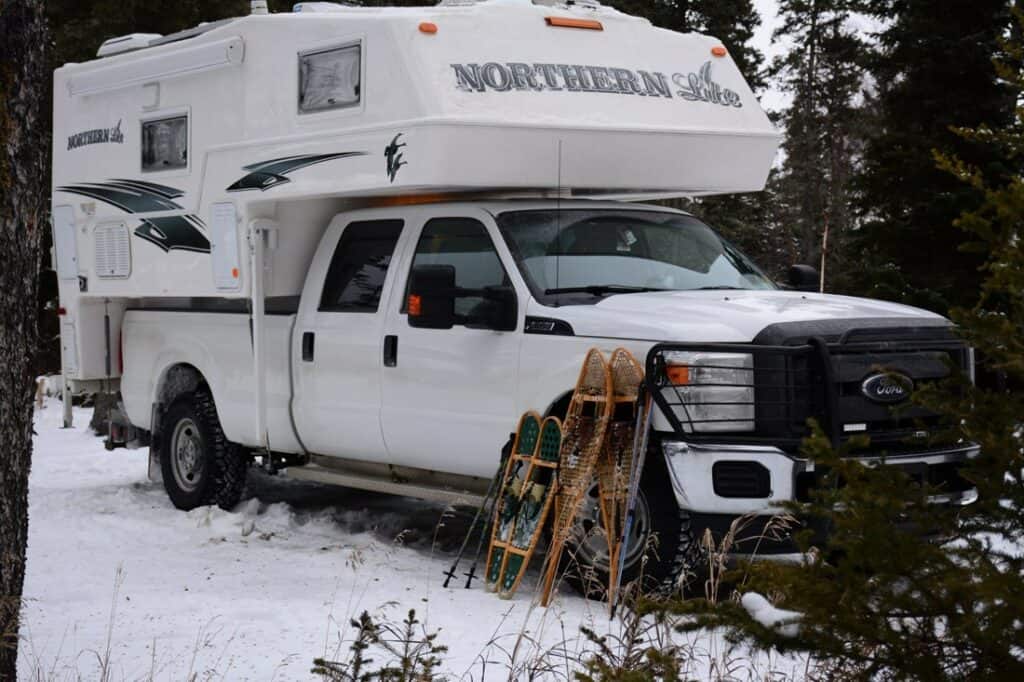 It’s January 2nd 2020 and Charlotte and I are on our first RV trip to northern Saskatchewan. The weather is great, -4 to -5 Celsius during the day and a low of -16 at night with a -21c wind chill. We have discovered the Prince Albert National Park has a couple of areas where they allow winter back country camping and we wanted to check them out. The PANP is located approximately 90 kms north of Prince Albert, Saskatchewan, Canada. The northern forest is beautiful in the winter and although this is one of our favourite parks in the summer we really had not experienced it in the winter except for a day tour, so decided to start the New Year off right in our 2nd home on wheels.

After posting some photos of our winter trip on my Facebook page and sharing it with a truck campers group I have had a number of questions how everything worked for us. This article is written to help fellow RVers and truck camper owners to share the good and bad of winter camping in a truck camper.

Our rig is a 2013 Ford F350 SRW, 4×4 Super Duty with crew cab and 8 ft. box. Our home on back is a 2017 Northern Lite 9.6 QE, four-season rated and the reason we refer to it as the “Igloo”. We have owned a bumper pull camper and a large 5th wheel and many models of truck campers including an Arctic Fox with a slide out, all having their place on the RV food chain, but we kept coming back to the truck camper. Winter camping is a good example why. We have our home with us always, self-contained with everything we need in case we get stuck or stranded. Four-wheel drive to get us where we want to go and a small foot print we can park anywhere. Regardless I do not have to preach to those who already know the benefits.

We pulled into the Park office and checked to see where we could park for the night (without a Park Ranger knocking on our door), the young lady at the desk said she had just called her boss after seeing our camper to see if it was allowed. She informed us the two campgrounds were usually for winter tenting only. After seeing our rig he said no problem as we would not block the camping area and would leave less of a footprint than a tent would…..bonus! We planned on only spending the night but the beauty of retirement we could change our plans and ended up staying four.

Really there was no down side to our four days in the Park’s back country…except perhaps as Charlotte noted the outdoor toilets were not heated, but the upside, no long line ups. They were clean and we were the only ones using them. All four days were very overcast so this was not going to help our solar panel along with the fact sunrise was around nine a.m. and set around 5:30 p.m. We have a 100 watt roof top connected to two six-volt batteries which were fully charged upon leaving (12.9V). Just so they were not drained for the night I ran our 2000 watt generator for approximately 3 hours while the furnace ran to bring up the temperature in the camper as we turned off the heat to travel approximately 3 ½ hours so it cooled quickly.

Not wanting to run the generator any more than necessary, the quietness of the north is something in itself to be enjoyed, I shut it down when the camper reached 21 Celsius inside and left the furnace on. We started the evening after having used a few lights to read with about 12.7v and the furnace kicking in about every 15 minutes, outside temp was around -12c at that time. Over the night the temp hit -17c and the furnace did run more often, not sure how much. We were extremely comfortable. I kept the top bunk window on my side cracked about ¼ inch and our central camper vent about ½ inch. Near our heads at the front of the camper bunk we have two Dry-Z-Humidifiers that use pellets and they appear to work great.

Under our mattress we have a marine hyper-vent material that allows for air circulation and this should be standard equipment in any four-season camper as it works great. Early next morning, and after making coffee on the stove I checked the moisture build up and was very happy with how little we had. There was a little on the bottom of the windows, under the mattress was dry as well as the top near the front. The NL has a sky light above the bed, this was also without moisture (we kept the skylight covered as well as the windows with the standard covers). The battery showed approximately 11.9v, not bad. I love those 6 volt batteries. It also helps that the battery compartment is heated along with our tanks in the basement. We used windshield washer antifreeze when using our toilet with some RV antifreeze in the tanks and hauled our own water for cooking and drinking, melting snow for dishes etc.

Next morning there was no sun again but as it brightened up we had a knock on the camper door, it was a young couple who had travelled from Saskatoon to do some ice fishing and had forgotten their fuel for the ice auger. I had extra so they were good to go. It was windy that day so we left the furnace running, did some hiking and in the afternoon four-wheeled into a campsite that was not plowed out to get away from those spending the day on the lake Ice fishing. You would not do that in a Class A, B, C or a pull behind. We could run our generator out there (approx. 2 ½ hrs.) and not bother anyone as we did some snowshoeing along the lake.

Campfires in the winter are even better than in the summer, no bugs and very warming. We returned to our designated site for the evening and as there was no one around ran the generator for approx. another ½ hour topping up the batteries to bring them to approx. 12.5v for overnight. This was pretty much what we did for the remainder of our stay. Temperatures before wind chill (I think wind chill is a Canadian thing to make us feel worse than it really is) were between -9 Celsius to -18 at night. We went through 1¼ 20 lb. tanks of propane using only the stove and heater, we did not run our fridge.

What would I do differently? Take more fresh water, take our portable 100 watt solar panel, install an insulation pad in our roof vents not being used and may consider some reflective insulation on the outside walls of the closets and front storage bins (not sure this is necessary). Almost forgot a fur lined outhouse seat for Charlotte.

Not wanting to push camper brands but I feel the four-season NL is fairly well insulated (never enough), the batteries remain warm, under-mattress ventilation and the dual pane windows, heated basement which kept the floor warm along with the standard take out carpet. We do not have enough roof top solar in marginal sun conditions, I would like 200 to 300.

Overall we had it very comfortable, we enjoy the north and perhaps even more in the beauty and stillness of winter, hard to imagine until you have been there. Lots of snowshoeing and photography, wild life co-operated seeing two lynx, fox, wolf, otters and many Whisky Jack or Grey Jacks. I will let the photos shared speak for themselves….we will be back for more.