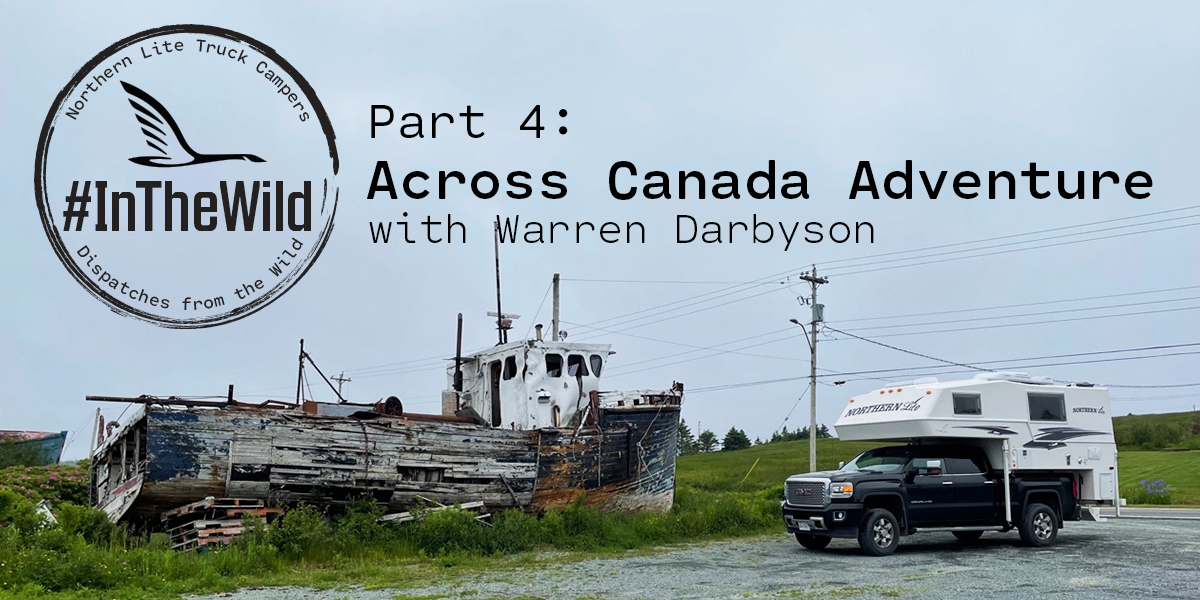 Left Arms of Gold campground in North Sydney and made a rainy trek along the beautiful and big Bras D’or Lake through Soldiers Cove to St. Peters and finally Port Hawkesbury where we sadly left Cape Breton.

A few interesting tidbits on this coastal drive:

Our tour of the Cabot Trail and Cape Breton was amazing! We met some great people, enjoyed exciting views, beautiful sunsets, and very well-groomed lawns. That last one might seem weird, but the people of Cape Breton love their lawns. They are huge and they are well-groomed at all times!

After a great night at Norse Cove where we enjoyed one of very few campfires we’ve had along the way, we continued our trek down the Nova Scotia coastline, again turning down any little road we could that led to the ocean. We did have to stop at a Mr. Lube in Dartmouth for a much-needed oil change from so much driving. The trick is finding a quick lube where you can drive over a pit so you don’t have to take off the camper. These are few in Nova Scotia.

While some people we met on our vacation mentioned that Peggy’s Cove, Mahone, and Lunenbourg where “tourist traps,” we loved them all! There’s a reason that tourists flock to these places (as you can see from our pictures).  We left Halifax and travelled through Brookside, Shad Bay, and West Dover to Peggy’s Cove. The buildings are old, the lighthouse is cool, the fishing boats are quintessential maritime, and the little houses and stores are very quaint. The rock formations in Peggy’s Cove are especially fascinating as they are different from all others we had seen on the east coast.

From Peggy’s Cove we followed the coastline around St. Margarets and Mahone Bay until we stumbled upon the little town of Mahone. This is a very quaint town with a huge mansion on the island in the bay. From there we continued to Lunenburg where we stayed at the Lunenburg campground in town and walked to the waterfront. Again, though this is a bit more touristy than some places, it is for good reason. The Blue Nose was in dock, as well as a few other schooners. The Blue Nose II is Canada’s most famous racing schooner and continues to take tourists on day trips. The streets above the harbour are filled with quaint shops and restaurants. We had one of our best meals of the trip at the Salt Shaker Deli & Inn. On Montague Street.

After picking up some delicious breakfast pastries at No 9 Coffee Bar on Montague Street, we drove around the Lunenburg harbour to view the community for the Lunenburg Photo Spot (actually an official spot on the map). We then followed every little ocean road possible to Yarmouth where we ate a delicious light lunch at the Cape Forchu Lighthouse. This was one of the tallest lighthouses we saw on our journey, and it was open to climb to the top (which of course Warren did)! From there we continued to Digby for the night. The Digby Campground had great facilities and was a short, easy walk to the waterfront where we enjoyed live music and the famous Digby scallops!

This morning we followed the advice of a shop owner in Lunenberg and drove into Annapolis Royal. This is a very quaint village on the Bay of Fundy. Once again, we enjoyed excellent breakfast pastries from Arch & PO (food definitely became a theme of the trip). On our way out town, we stumbled upon the Still Fired distillery. This shop was amazing, with several delicious in-house vodkas and moonshines. They offer tastings before purchase, recipe cards for mixing drinks with their brews, and some cool branded clothing and glasses. The salesperson was exception in her knowledge and friendliness…needless to say, we left with several varieties!

After leaving Annapolis Royal, we continued along the Bay of Fundy to Windsor where we sadly left the coastline to head inland through Sackville to Laurie Provincial Park where we set up to spend a few nights.

We had the pleasure of camping at Laurie Provincial Park with our daughter, her boyfriend, and their dog. This is a great park on Grand Lake. The sites have lots of trees, decent facilities, and a few different beaches. We played cards, ate well, and had a few drinks to celebrate Canada Day.

We found ourselves with an extra day, so we travelled through Truro, through Pictou to the Caribou ferry where we sailed off to Prince Edward Island. With a lot of rain and not a lot of time, we chose to drive the East Coastal Trail. A few highlights included the Panmure Island Beach, the Panmure Island lighthouse, Basin Head Beach (The Singing Beach), and the East Point lighthouse. There was an abundance or potato and corn farms to see everywhere we went. We made our way from East Point to Charlottetown where we stayed at the extremely busy KOA.

Before leaving Charlottetown, we drove through the harbour downtown, enjoyed breakfast at a little café, and also caught their weekly farmer’s market. From there we headed for the Confederation Bridge, which is pretty cool at 13 kms long, and headed back to Truro where spend the afternoon golfing again at the Brookfield Country Club. This was our second visit there as it has a casual atmosphere, reasonable prices, and allowed ride-alongs for a few of us who don’t golf. We said a sad goodbye to our daughter and her boyfriend before driving to Camper City in Moncton, NB for the night. This is another very busy campground with a lot of amenities that are great if you have children with you.